I was just a tourist enjoying the amazing sights of Israel, and then I realized I was standing in the shadows of long-silent martyrs. Our first stop in Israel was Caesarea Maritima, one of Herod Agrippa’s archaeological masterpieces; it was also the site of many profound early church “moments”. The Apostle Paul was imprisoned and preached there. Peter was directed by God to go Caesarea; when he did, he witnessed Gentiles baptized in the Holy Spirit and then brought into the church for the first time.

In 44 A.D., Herod put on a garment made wholly of silver, and came into Caesarea’s massive amphitheater early in the morning. When the silver was illuminated by the sun’s rays, those present declared him a god and not a man. He accepted their praise, but days later, as he lay dying from a sudden illness, he confessed that God had proven his flatterers to be liars. You can still see the remains of the stone viewing stand where where his pride was revealed.

Stretching out along the shore is the remnants of the 10,000 seat Hippodrome, where they fed Christians to the lions. As our guide shared the site’s barbaric history, I reached down to scoop up some of the sand, realizing this very sand probably soaked up some of their blood. That blood is part of the foundations of our faith. The blood is long gone, so now sand and stones tell the story. Ancient foundations are scattered all across Israel. The foundation stone or cornerstone is the first stone laid in a structure, so it determines if the construction is square, level and plumb. There is no other true foundation other than Jesus. Neglect Him and we will look just like those remains. 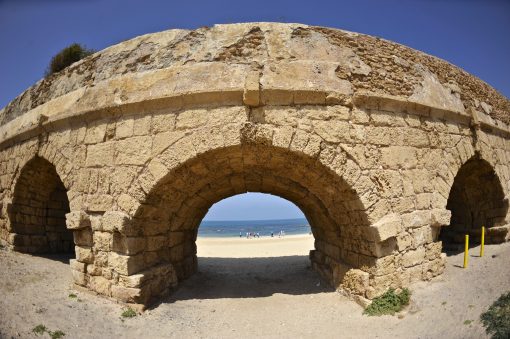 Jesus is also our keystone or capstone. The keystone is the center-most stone, and the last stone added to an arch. Keystones are what enabled all those ancient arches to function.

As the First and the Last, Jesus was the First Stone laid (the cornerstone). And He will be the Last Stone placed (the keystone).

Jesus looked directly at them and asked, “Then what is the meaning of that which is written: “‘The stone the builders rejected has become the cornerstone’? [He is clearly talking about the first stone laid in a building.] Everyone who falls on that stone will be broken to pieces; anyone on whom it falls will be crushed [He’s describing a keystone now].

Since the cornerstone is the first stone laid 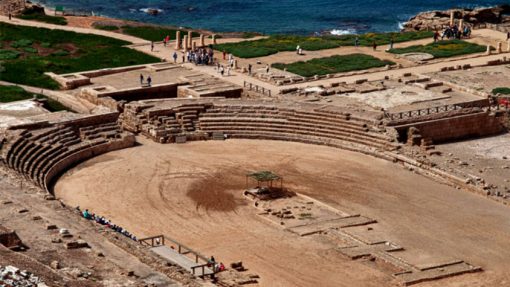 and is strong and stable, it would be easy to fall on top of one. But it would be difficult for that buried stone to ever fall on anyone. However, if a keystone falls, countless other stones from the arch and building would crumble down as a result. We are all called to be stable cornerstones as well as rightly-fit keystones in the church as we serve Jesus.

And He shall bring forth the capstone with shouts of “Grace, grace to it…The hands of Zerubbabel have laid the foundation of this temple; His hands shall also finish it…For who has despised the day of small things?” Zechariah 4

Of course the question we each face is, am I the right quality of stone? A small stone can bring down a giant, while a great stone can hold up the weary. Like Peter, we are “the rock Jesus is building His church on so that the gates of hell cannot prevail against it.” As I walked through the ruins, I looked up at a keystone that was still holding a 2000-year-old arch in place, I could see my calling in a new light.

Ephesians 2 says, “We are members of the household of God, having been built on the foundation of the apostles and prophets, Jesus Christ Himself being the Chief Cornerstone, in whom the whole building, being fitted together, grows into a holy temple in the Lord, in whom you also are being built together for a dwelling place of God in the Spirit.” When we join together in unity, not only can we accomplish great things, but we will be filled by the Living God; and He will not come and go, but dwell in us richly forever.